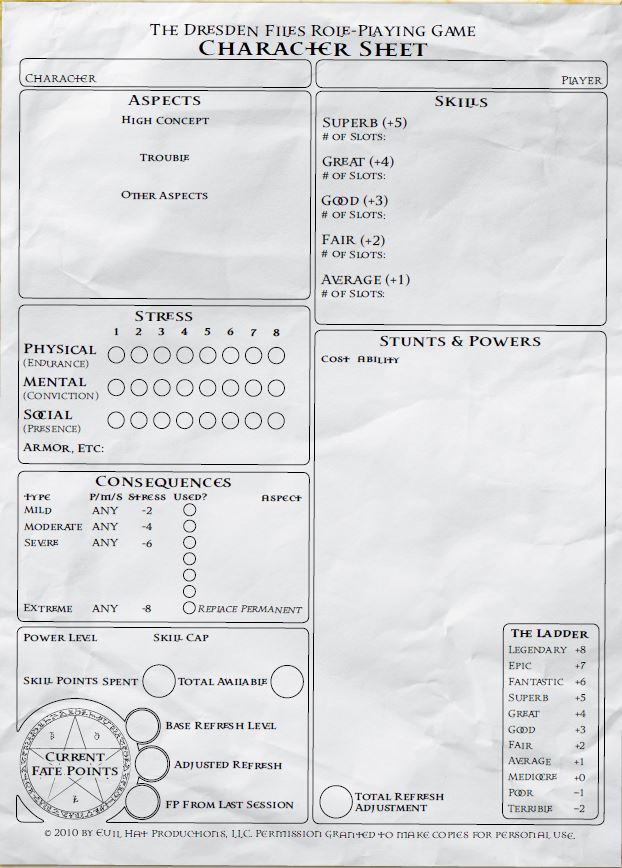 * under Stunts & Powers also include Abilities, Attributes, Talents, Classes Taken, and Complications. Your cap is the same as how many years you've been at MU (freshman:1; sophomore:2; junior:3; senior:4 etc.). Meaning at this point in time you can take 3 to 4 beginning level classes.

* Under Stress you can have a total of 11 circles.

Character creation starts with a concept for your character. It could be modeled after a character from a favorite novel or movie, or it could be based around some specific thing that you want to be able to do (like break boards with your head, turn into a wolf, blow things up, etc.). Just like you did with the game’s issues earlier, you’re going to take your ideas and turn them into the two central aspects for your character—high concept and trouble.

Player characters should be exceptional and interesting. They could very easily find success in less exciting situations than those that come their way in play. You must figure out why your character is going to keep getting involved in these more dangerous things. If you don’t, the GM is under no obligation to go out of her way to make the game work for you—she’ll be too busy with other players who made characters that have a reason to participate.

Your high concept is a phrase that sums up what your character is about—who he is and what he does. It’s an aspect, one of the first and most important ones for your character.

Think of this aspect like your job, your role in life, or your calling—it’s what you’re good at, but it’s also a duty you have to deal with, and it’s constantly filled with problems of its own. That is to say, it comes with some good and some bad. There are a few different directions you can take this:

These aren’t the only ways to play with your high concept, but they’ll get you started. But don’t stress out over it—the worst thing you can do is make it into too big of a deal. You’ll come up with four other aspects after this one—you don’t have to get it all nailed right now.

In addition to a high concept, every character has some sort of trouble aspect that’s a part of his life and story. If your high concept is what or who your character is, your trouble is the answer to a simple question: what complicates your character’s existence?

Trouble brings chaos into a character’s life and drives him into interesting situations. Trouble aspects are broken up into two types: personal struggles and problematic relationships.

Your trouble shouldn’t be easy to solve. If it was, your character would have done that already, and that’s not interesting. But nor should it paralyze the character completely. If the trouble is constantly interfering with the character’s day-to-day life, he’s going to spend all his time dealing with it rather than other matters at hand. You shouldn’t have to deal with your trouble at every turn—unless that’s the core of one particular adventure in the story (and even then, that’s just one adventure).

Troubles also shouldn’t be directly related to your high concept—if you have Lead Detective, saying your trouble is The Criminal Underworld Hates Me is a dull trouble, because it is already assumed with your high concept. (Of course, you can turn that up a notch to make it personal, like Don Giovanni Personally Hates Me, to make it work.)

Before you go any further, talk with the GM about your character’s trouble. Make sure you’re both on the same page in terms of what it means. Both of you may want to find one way this aspect might be invoked or compelled to make sure you’re both seeing the same things—or to give each other ideas. The GM should come away from this conversation knowing what you want out of your trouble.

Since your trouble is an aspect, it’s something you should also be able to invoke, right? Because you've been so focused on how this complicates your character’s life, it’s easy to miss how a trouble also helps your character.

In short, your experience with your trouble makes you a stronger person in that regard. Dealing with personal struggles leaves you vulnerable to being tempted or cajoled, but it can also give you a sense of inner strength, because you know the sort of person you want to be. Problematic relationships often cause trouble, but people do learn hard lessons from the troubles they deal with. They especially learn how to maneuver around many of the smaller issues their troubles present.

Lenny’s The Manners of a Goat could be used to the group’s benefit. Maybe he turns that up intentionally, to draw attention away from Lily’s character sneaking around.

Ryan’s Rivals in the Collegia Arcana can come in handy when dealing with rivals he knows well—he knows what to expect from their tactics. He could also use this aspect to gain aid from people who share his rivals.

A lot of character creation focuses on coming up with aspects—some are called high concepts, some are called troubles, but they basically all work the same way. Aspects are one of the most important parts of your character, since they define who she is, and they provide ways for you to generate fate points and to spend those fate points on bonuses. If you have time, you really might want to read the whole section dedicated to aspects before you go through the process of character creation.

In case you’re pressed for time, here are some guidelines for choosing aspects.

Aspects which don’t help you tell a good story (by giving you success when you need it and by drawing you into danger and action when the story needs it) aren’t doing their job. The aspects which push you into conflict—and help you excel once you’re there—will be among your best and most-used.

Aspects need to be both useful and dangerous—allowing you to help shape the story and generating lots of fate points—and they should never be boring. The best aspect suggests both ways to use it and ways it can complicate your situation. Aspects that cannot be used for either of those are likely to be dull indeed.

When you’re told you need to come up with an aspect, you might experience brain freeze. If you feel stumped for decent ideas for aspects, there’s a big section focusing on several methods for coming up with good aspect ideas in Aspects and Fate Points.

If your character doesn’t have many connections to the other characters, talk with the group about aspects that might tie your character in with theirs. This is the explicit purpose of Phases Two and Three—but that doesn’t mean you can’t do it elsewhere as well.

If you ultimately can’t break the block by any means, don’t force it—leave it completely blank. You can always come back and fill out that aspect later, or let it develop during play—as with the Quick Character Creation rules.

Ultimately, it’s much better to leave an aspect slot blank than to pick one that isn’t inspiring and evocative to play. If you’re picking aspects you’re not invested in, they’ll end up being noticeable drags on your fun.

Lastly, pick a few simple, quick spells that you can cast at will with no preparation or study. Describe what it does and how it is cast. You'll want them to be simple and capable aiding in multiple tasks. Another element that makes a good spell is that with study it can be built upon to make more difficult/complex/specific spells.

Ascendant campaigns can view previous versions of their pages, see what has changed (and who did it), and even restore old versions. It's like having a rewind button for your campaign.

We've already been saving your edits, so if you upgrade now you will have instant access to your previous versions. Plus, you have our no risk refund guarantee , so there's nothing to lose.